The rebirth of the annual Hunter Supper in Rhame Friday (Nov. 5) was a success, one of the organizers said as he looked out at an American Legion Hall filled with people eating and getting ready for the for the start of the auctions and raffle. 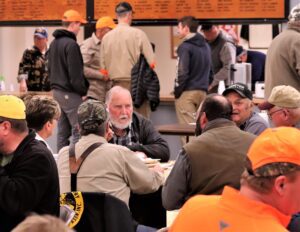 According to Cal Klewin, it was a good rebound after the previous year’s event was canceled because of the pandemic.

The tables were so full at times that many ate the meal on the bench along the east wall of the hall.

The meal was roast beef, beans and scalloped potatoes, with some people waiting in neighboring businesses for a chance to eat dinner. “We always get a lot of compliments on the meal, which is cooked by volunteers,” Klewin explained.

“We exceeded our expectations,” Klewin added. The event sold more than 1,200 tickets. “We were very pleased with the attendance. It was great to have support from the region and outside of the region. There were people in attendance from Grand Forks, Fargo and different areas in the eastern part of the state.”

Klwein said that people will see the impact locally of the fundraiser. “We hope to contribute to the community on behalf of the Rhame American Legion to various community events. It is kind of Rhame’s civic center. The American Legion is very happy to raise money for that so that the community and region can enjoy that building.”

The building isn’t the only thing the legion supports, he added. “The goals of the Rhame American Legion is to support patriotism. Through that, we support Boys and Girls State for the county. If there are candidates from Bowman County schools who are going to attend Boys and Girls State, we would fund those. Also, if there is an American Legion team put together, we would assist in funding that,” Klewin added.

In addition to a Texas Hold’Em competition, the big focus of the evening was the live auction where a guided pheasant hunt, a barrel cooker, several guns, a Damascus Knife and a massive gun safe weighing more than 1,100 pounds were on the block and up for bids. 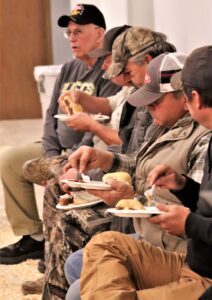 Dale Hande of Rhame was the auctioneer, with Klewin and others acting as spotters. 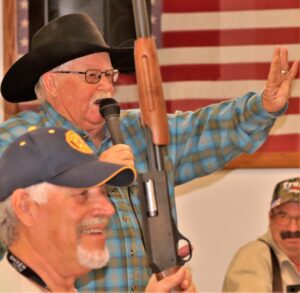 The funds raised by the event will go to maintain and operate the American Legion Hall in Rhame, according to Klewin.

The legion is already accepting donations for the 2022 event, Klewin added.