Located in Bowman County, Gascoyne was originally established as a Milwaukee Road Railroad townsite in 1907. It was first called Fischbein, after Henry G. Fishbein, one of the first residents of the community and the first postmaster; but, the name was changed to Gascoyne on March 25, 1908. The new name came from a construction foreman on the Milwaukee Road transcontinental rail line that was built through the city, though an alternate explanation suggests that the name refers to the large deposits of natural gas found in the area.

Never a very large town, Gascoyne’s population peaked in 1930 at 97 people, after which, it started a slow decline to its present day population of just 16 people. However, throughout the years, the small town boasted a hardware store, a bowling alley, a grocery store, a Standard Oil station, taverns, and a town hall, which is best remembered for the many dances that were held there. Children attended school in the prominent building that still stands. The impressive school was built in the 1910s and housed three large classrooms and had a basement large enough for early competitive basketball contests.

At some point, lignite coal was found in the area, and Gascoyne was the site of a coal mine for much of the 20th century. The most active period for the mine occurred between 1975 and 1995, when about 2.5 million tons of lignite were produced per year.

Gascoyne’s post office closed in 1971 and the Erickson Grocery was the last retail business in Gascoyne to close, in 1972. Currently owned by the city of Gascoyne, the store stands on the west side of Main in the middle of what was the business district. 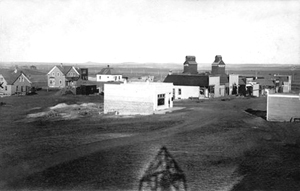 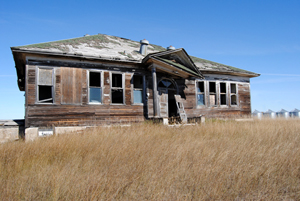