Bowman County Commissioners are elected at large on a non-partisan basis for staggered four-year terms. The County Commission is the governing body of the County responsible for overseeing County activities and working to ensure that citizen concerns are met, federal and state requirements are fulfilled, and County operations run smoothly.

The State constitution gives the Board of County Commissioners the power to adopt zoning ordinances (local laws), levy taxes, appropriations, authorize bonds, set salaries, approve bills, accept bids, approve the County budget and establish the requirements/policies for the Departments under its control.

The Board governs all unorganized townships of the County directly.

The Board of County Commissioners met in regular session on February 16, 2021, with the following present: Pine Abrahamson, Rick Braaten, Lynn Brackel, Josh Buchmann and Jerry Jeffers.  Chairman Brackel called the meeting to order at 9:00 AM.  The Pledge of Allegiance was recited. Pastor Ed Kvaale shared a prayer.

Brackel asked for corrections or additions to the agenda. A Citizen Interest Application for the Zoning Board was received and will need to be reviewed.  Abrahamson made a motion to approve the agenda with Buchmann seconding the motion, and upon a vote, the motion was carried unanimously.

The following February 16, 2021, vouchers were approved by a motion made by Abrahamson, with Jeffers seconding the motion, and upon a vote, the motion was carried unanimously.

Abrahamson made a motion to approve the February 2, 2021 minutes, with Braaten seconding the motion, and upon a vote, the motion was carried unanimously.

Jeffers made a motion to appoint Chris Fischer to replace Mike Sondeland, who has resigned, on the Bowman County Zoning Board, with Abrahamson seconding the motion. A roll call vote was taken with all members voting aye. Motion carried.

With no further business to discuss, Jeffers made a motion to adjourn the meeting at 12:49 PM, with Braaten seconding the motion, and upon a vote, the motion was carried unanimously.

Board of Bowman County Commissioners

Scheduled Appointments Made in Advance

The County Commission has been invited to attend the following events and/or meetings:

Regular meetings of the Bowman County Commissioners are generally the first and third Tuesday of each month beginning at 9:00 a.m. in the commissioner room located on the lower level of the courthouse. 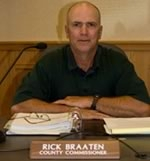 Rick was first elected as a Bowman County Commissioner in November 2008.  He is a 1975 graduate of Bowman High School and graduated from NDSU in 1979 with a BS degree in Agricultural Economics. Rick is married to Laurie Fish and they four sons. Rick engages in farm and ranch work.

Josh graduated in 1996 from Bowman High School and attended NDSCS, graduating in 1999.  He moved back to Bowman in 2006.  He has two children; his daughter lives in Wahpeton and works for NDSCS and his son attends Bowman High School.

Jerry was elected to the Bowman County Commission in 2016 and is the third generation on the Jeffers farm in southwestern Bowman County; homesteaded in 1909.  Jerry also has operated a cabinet shop in the winter since 1976.  He has three sons and is married to Karen who has two sons and a daughter.  Between them they have 11 grandchildren.

Pine was first elected as a Bowman County Commissioner in 2004. Pine was born and raised in Bowman County. He has been engaged in agriculture his entire life; he is the third generation to be involved on the family farm where he spends many hours working with his youngest daughter her husband. Pine is married with 4 children and 4 grandchildren. 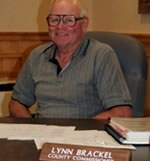 Lynn was elected to the County Commission in 2008. He graduated from Dickinson State University in 1966 with a music degree and taught band and chorus for 12 years. Lynn still enjoys music and has directed the Church Choir for 30 years, Bowman County Community Band for 20 years, and Saxy Brass for 20 years.  Lynn owned a plumbing business and served the Southwest North Dakota, Montana, and South Dakota areas for over 30 years. He has 3 children and 5 grandchildren.