2022 Farmer/Rancher of the Year Nomination Form

The annual Ag Appreciation Banquet will be held on Wednesday, October 26, 2022 at the 4 Seasons Pavilion in Bowman, North Dakota. Join us for a free evening of food, fellowship, and entertainment as we honor the 2022 Farmer/Rancher of the Year and our incredible ag communities.

2022 Farmer/Rancher of the Year 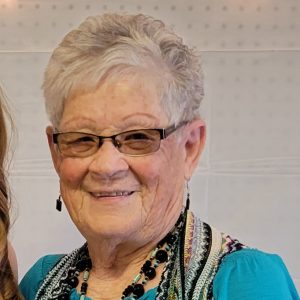 Laureen Stuber was born in Bowman and grew up on the family farm south of Bowman with her parents Lawrence and Frances Faris, and brother Lowell Faris. Laureen graduated from Bowman High School in 1961, and attended the National School of Business in Rapid City SD. When Laureen came home from college, she went to work at the 1st National Bank in Bowman.

Laureen married Richard (Dick) Stuber on May 4, 1963, and to this union a daughter, Wendy, and son, Duane were born. They lived on the ranch north of Bowman. Dick passed away in 1998, and Laureen continued to live on the ranch. Laureen moved into town in the fall of 2020.  Laureen is proud to be the grandmother to 5 grandchildren, and 2 great granddaughters.

Laureen was a 4-H leader for the Wildrose and Cash and Cottage 4-H clubs in Slope County for 10+ years while Wendy and Duane were 4-H members. Laureen continues to be a strong supporter of 4-H, donating a show halter in memory of Dick at the Slope County Fair to the Champion Jr Beef Showman.

Laureen and Dick served as ND Jr Hereford advisors for many years. They took the ND Jr Hereford delegation to the National Convention in Kansas City, Mo for several years, and assisted with many ND Jr Hereford field days with Stuber Ranch being a host for a couple of the Jr Field Days.

Laureen’s a member of the ND Hereford Women and the American Hereford Women. Laureen held several offices on the state level, and served as a National Director for a 4 year term. Laureen has been a host to many different agriculture/cattle groups at the ranch over the years helping to promote the ND Beef Industry. Laureen was a finalist in 2014 for the Farm and Ranch Guide’s Country Woman of the Year.

Laureen volunteers for the ND High School Rodeo Finals held here in Bowman, at the Slope County Fair, and at her church. 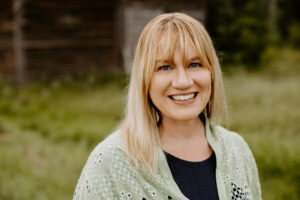 Katie Pinke is evidence of rural America’s capabilities. From rural North Dakota, she works as the publisher and general manager of Agweek. Katie and the Agweek team showcase agriculture “from field to fork” and investigate important farming and ranching issues on digital platforms every day and in a weekly magazine and regional television show.

Before coming to Agweek, Pinke, the fifth-generation raised on her family’s farm, spent more than 12 years in marketing, including working in grassroots communication across California agriculture. Then, she ventured out on her own as a communications consultant and event speaker. Pinke remains a keynote speaker across North America, in addition to her work at Agweek.

Pinke and her husband have three children and own a small business. In early 2020, she spent three months in Colorado as her son went through spinal cord rehabilitation following a skiing accident that left him paralyzed from the chest down.

Pinke also has served on a small-town city council and volunteers for community organizations including 4-H, FFA and her church.

Pinke’s weekly Agweek column, available at agweek.com, takes on family, rural life, motherhood, career, community and more. Connect with her on her Pinke Post Facebook page or on Twitter or Instagram @katpinke, where along with insightful takes on rural life and agriculture she shares the beauty of North Dakota, from sunrises to sunsets and ball games to barnyards.

Past Farmer/Rancher of the Year Awards