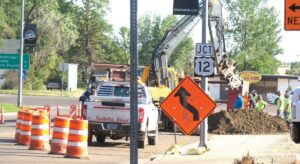 Bowman County and Slope County is under construction.

While one project is slated to end soon, others will remain being repaired through into October.

However, the east intersection of US 12 and US 85 (near the fairgrounds) is being reconstructed in phases, the state explained online on its construction webpage.

Traffic control is in place to maintain two-way traffic through the intersection on 12-foot wide lanes. State officials warned that turning movements for long loads will be difficult.

The west intersection of US 12 and US 85 is being reconstructed and traffic is being detoured on a temporary paved bypass around the construction work.

Construction started Aug. 11 and has replaced the pavement at the both the west and east portions of Highway 85.

On Highway 12 through Bowman, the construction is expected to continue through mid-October, according to the plan set up by the Department of Transportation. 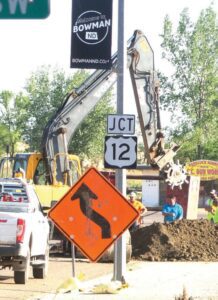 Called the Bowman Municipal Section, the state announced that any delays would be about 15 minutes or less and goes from Mile Post 33.207 to Mile Post 34.192. It includes grading and paving.

In addition, the restriction on the widths will remain. A 14-foot width restriction is in place for the US Hwy 12 between the west and east intersections with US Hwy 85.

Also, the east intersection of US Hwy 12 and US Hwy 85 in Bowman will be utilizing a traffic shift with narrow driving lanes. A 12-foot width restriction is in place at the east junction of US 12 and 85.

State officials also warned that turning maneuvers for long vehicles may be impacted and that contractors will be working onsite.

Highway 67 from Scranton north is being worked on, with most of the work in the city. There currently is loose gravel in Scranton.

The construction was started July 7 and is expected to end in mid-October, with a detour but no delays or closures.

The bridge over the Little Missouri River just east of Marmarth is being repaired with traffic being reduced to one lane with traffic alternating using traffic lights.

The project started July 11 and is expected to end by Sept. 30, according to the state’s DOT.

There is a current width limit for loads of 20 feet on the bridge.