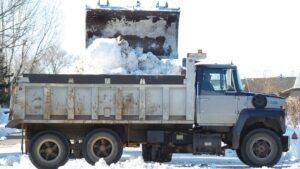 Spring may have just recently arrived in North Dakota, but much of the state and region didn’t look like it for the past week.

Some cities, like Minot, got about three feet of snow over a three-day period a week ago.

But some, like cities in the southwest part of the state were not spared as snow and high winds combined to build drifts almost as big as houses and in other places forced local and state officials to issue “No Travel” advisories because of zero visibility and icy conditions.

Even after the storm left, some cities were left to create a series of snow mountains more than one story in height down their main streets as the snowplows worked to clear the local highways, roads and streets.

The North Dakota Department of Transportation closed Interstate 94 from the Montana border to Jamestown Tuesday evening and it remained closed for most of the week all the way to Billings.

The same was happening to state highways like 85 and 12 in the southwestern corner of the state.

Highway 85 south of Bowman was impassable during the storm with approximately 15 vehicles getting stuck in the extremely poor weather conditions during the blizzard.

The local sheriffs announced warnings asking people not to leave their homes unless it was an emergency in order to give the emergency vehicles a chance to get through in the poor weather conditions.

In addition, weather conditions and ice covering the roads Sunday had Adams County roads under a No Travel Advisory. That included Highways 12, 8 and 22.

On his Facebook page, the Adams County Sheriff’s Office and Emergency Management posted the no travel warning with photos of vehicles stuck in snow or overturned to show how dangerous travel was. “Roads are extremely icy due to wind blowing snow across throughout the day. Adams County roads are currently under No Travel Advised due to the icy conditions,” they warned Sunday afternoon.

In some places around Bowman, the drifts were as high as 18 to 20 inches and perhaps more, depending on the location and how much the wind was pushing the snow.

According to the meteorologists in Bismarck, in the southwestern region Regent had 20 inches and Hettinger had 18 inches of snow as of Thursday morning. Southwest of New England, snow was measured at more than 16 inches.