2022: Inflation raises the stakes in the farm game and The Great Resignation may be a game-changer

Home  /  County   /  2022: Inflation raises the stakes in the farm game and The Great Resignation may be a game-changer

27 Jan 2022: Inflation raises the stakes in the farm game and The Great Resignation may be a game-changer 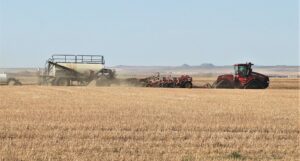 Inflation coupled with the effects of The Great Resignation will be among the factors to watch in the coming year in agriculture.

Every year is a gamble in agriculture, with the cards being revealed in due time.

But economic inflation, which closed out 2021 rising to levels not scene in about four decades, is raising the stakes for farmers and the other players sitting at the ag table.

“Most all production costs are going to be higher,” says Bryon Parman, North Dakota State University economist, from crop inputs, to equipment to labor. “There are inflated costs down the line.”

Farmers, and the co-ops to which many of them belong, are having to ante up considerably more for inputs such as fertilizer, herbicide and pesticide.

“Being positioned ahead of the time of need is critical to being a reliable supplier, but then that puts the risk on us,” says Jim Hlatky, general manager of the Pro-Ag Farmers Co-op, which serves the Alexandriaarea of west-central Minnesota.

“And the reward,” he adds. “If you guess right, it’s rewarding.”

Co-op members are relying on managers like Hlatky to lay in supplies to be ready for spring planting, but at a reasonable price.

Parman sees the runup in fertilizer and other input prices as a game-changer for co-ops if fertilizer prices should drop dramatically in the spring.

“If they’re left holding the bag, that could potentially put some of them out of business,” Parman said.

Pro-Ag and other co-ops have to deal with those risks. “Especially in a rising market, you don’t want to be long,” Hlatky said. “You don’t want to have more inventory than you can you sell, because when that things drops, it could drop $50 to $100 a ton. “

That runup prompted some farmers in the southern Red River Valley to apply fertilizer in the fall instead of spring, says Brad Van Overbeke, general manager of the Farmer’s Union Co-op of the Southern Valley at Fairmount, North Dakota.

“A few guys who would have been waiting until the spring but moved up,” Van Overbeke said.

Farmers in more northern areas who are late to plant face the possibility of being caught short on fertilizer, Parman said.

“It could be a ‘while supplies last,’ kind of a thing,” Parman said.

If there is a shortage, it would be “devastating” on corn yields, he said.

Hlatky said prices won’t fall until after the 2022 crop is in the ground, but could drop after that when a lull could allow manufacturers to catch up.

There is no doubt fertilizer supplies are tight and prices are high, but there is still global demand. While there was some speculation that high fertilizer prices might drive down corn acres, corn remains king.

Van Overbeke said there are about 5% of growers in his co-op that might go all beans. Most are sticking with their normal rotation and biting the bullet on fertilizer prices.

Spring wheat is an option in North Dakota and Hlatky’s area of Minnesota.

But Van Overbeke said wheat needs almost as much nitrogen as corn and soybeans require more spraying. With herbicide and pesticide prices also on the rise, “the math still goes to corn,” Van Overbeke said.

Hlatky agreed that there was just a “slight shift to soybeans and wheat, not huge. Maybe a 5% move right now.”

So a 5% increase in wheat would be in line those estimates.

“It’s a very similar conversation to fertilizer … but the raw inputs that go into some of those other chemicals are not as difficult to come by as fertilizer inputs are,” said Shelby Myers, economist for American Farm Bureau Federation.

Co-op managers say the two most popular herbicides, Liberty and Roundup, are both on allocation from the manufacturers. And when those are in short supply, it creates more demand for other options.

Another driving force behind the inflated input costs is another carryover from 2021, what economists are referring to as the “The Great Resignation.”

What is The Great Resignation?

Before the coronavirus pandemic, unemployment was already low. COVID-19 outbreaks instantly forced some people out of a job and many of those have yet to come back, creating an even greater demand for labor and driving up wages and, in turn, inflation.

It is turning into such a monumental event that Parman likens it to The Great Depression.

Some blame extended unemployment benefits offered after COVID-related layoffs. But Parman notes that those have mostly ended and is not the major factor behind The Great Resignation.

Instead he sees early retirements from the huge Baby Boom generation, child care challenges and shifting priorities as drivers.

With schools on distance learning, somebody had to stay home with children or be ready to on short notice.

“Families spent a year or more doing that, and some of them figured out how to make it work on one income,” Parman said. “Downsizing some things here and there.”

It all means rural areas and farmers needing help may continue to struggle.

“My No. 1 concern as a co-op manager is staffing and there’s this huge disconnect between what growers expect and what this new generation of employees will do,” said Hlatky, who grew up on a dairy farm and fondly recalls his first co-op job offering two 15 minute breaks a day and Sundays off.

Now, he says, “If you can’t leave early on Friday, you’re disgruntled.“

He’s already raised wages across the board.

“That’s permanent inflation,” he says. “We have to raise our rates for application and every service that we offer. “

He said he doesn’t see the situation getting better. “We’re kind of past doing more with less,” he said. “We’re going to end up backing away from certain services.”

Retirees have provided some of the seasonal help that Van Overbeke and farmers in his area have needed but some of them are aging out of even the part-time labor force.

“The retired people that were working for me are getting so old they can’t do it anymore,” he said.

Whether more recent retirees are interested in filling in is a question.

One upside for rural America, Parman notes: “Rural areas will have access of more jobs through the greater acceptance of remote work.”

With inflation looking like it will be a force to reckon with for awhile, the Federal Reserve has indicated it will be more aggressive in 2022 in trying to keep it in check.

Raising interest rates is one one way to combat inflation, like the Federal Reserve did under Paul Voelker back in the 1980s. But that strategy also can trigger a recession.

Higher rates on operating loans and for land or machinery buys could have an effect on ag business, he said, but with the interest rates being so low to begin with, he said he thinks that will have less of an impact than the inflated prices farmers are paying compared to last year.

“Those are really big jumps from a year ago,” Parman said.